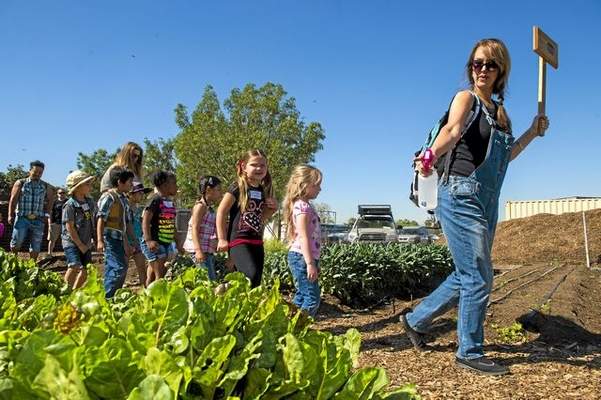 As demand for local produce grows, farmers across the region are making changes as water is limited and conservation is mandated.

“It’s very much a topic of conversation on our tours,” said Melissa Castaneda, an educational program director at Amy’s Farm in Ontario. “We want to squeeze in as much information as we can, share the impact ... let them be aware and empower them as young as kindergarten in making great choices and making healthy choices.”

On Wednesday, Gov. Edmund G. “Jerry” Brown laid out a new water restriction plan that asks cities and towns across the board to cut its water use by 25 percent.

Amy’s Farm has restructured its garden using wood chips as a ground cover. The farm operates on well water — not a city water source, but it aims to “treat every single drop of water as precious as possible because wells run dry,” Castaneda said. “We want to be good ‘storers,’ particularly with the drip line and its timing so it is giving enough water for the plants they need without over watering.”

Three Sisters Farm in Redlands, owned and operated by Abby Harned and her husband Jason, was established seven years ago. The owners met at Cal Poly Pomona, where Abby studied agronomy and Jason environmental science.

“We are in Southern California and we are blessed with amazing weather. Which means we don’t get a break,” Abby said. “We actually have our own well, and so we’re not going to be affected by the restrictions. And even before the drought, we were micro irrigating with drip lines and so we were already conserving water in that way. But what does affect us more than the drought is the warmer temperatures. We had a warm winter and we are not getting as many freezing temperatures, which affects the natural element of things in different ways. We’re going to have to see how that affects us down the line. But one thing is for sure, the insect population is higher with the higher temperatures.”

Amy’s Farm’s efforts to preserve water are part of an educational tour the farm holds for schoolchildren. And while preservation is not the initial focus of the tour — that’s the farm’s organic operation — the idea is vital to share, Castaneda said.

Eating local ingredients has been en trend in recent years, and local growers are gaining traction in their surrounding communities.

Bill Cunningham, a former Redlands mayor, has been operating Glencairn Farm in Redlands since the 1970s, when he retired from teaching.

An advocate of open space and a green community, Cunningham said he opened the farm in part to show that if he could “talk the talk” he could “walk the walk.”

“Thus far the community has been very supportive and it’s very much appreciated,” he said.

Downtown Redlands’ weekly Thursday Market Night was founded under Cunningham’s leadership in the 1980s and modeled after a weekly farmers market in San Luis Obispo. It’s home to local growers — and other groups — selling their goods, including Cunningham.

“The University of California out of Davis has made a concerted effort to encourage local farming, especially farming near cities, with the idea that local foods have merit and small farms make sense,” Cunningham said. “And that’s really the genesis of, I think, the enormous expansion of farmer’s markets and that kind of thing. It’s a national trend. But there’s constant pressure on open land for development and the issue of water. However, the farms in Redlands are in reasonably good shape because of the nature of the water supply.

“The thing is, this valley is well watered through mountain streams and the Bunker Hill basin, which is the main storage space for the area with 500 million acres of water. It has been drawn down and is the lowest that I know of, but there’s adequate water if someone wants to go with it. But the problem for that water with regard to domestic use is much of it is contaminated,” he said.

Cunningham does use a local water source to water his crops as demand grows because local farming is an “important economic element” for the city of Redlands. But he says conservation is important.

“We’ve tried to modernize and be as conservative in water use as we can,” he said.

Cunningham is president and manager of West Redlands Water Co. and serves as the zanjero, or water manager.

“I deliver water to 35 other shareholders across Redlands, and we are doing our very best to cut our water use to bare minimum. But it is important to maintain our groves as well as we can. We are just squeezing the water as hard as we can and keep Redlands’ groves green.”

Owning a farm was something Abby Harned dreamed of when she was in college, and after a few years in the corporate world, she and Jason decided to buy land. That was the hard part, she said.

“Once we did that, however, the timing was perfect with the consciousness (of organic foods) that has come around. We watched that happen as we were making plans to open the farm,” she said.

Spring has arrived and summer is well on its way, as water restrictions go into effect and the drought continues into its fourth year as water preservation and conservation remain on minds across the Inland Empire.

Preservation is key for the future, Castaneda said.

“It’s really neat and encouraging to see that kids are already so well educated on the problem and want to find out what they can do to help,” she said. 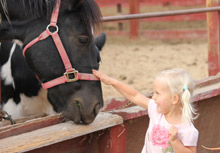 Experience a hands-on guided tour on a polycultural farm!

GUIDED TOURS BY RESERVATION for all groups